The United States Blues
Home Economics Trump Cheers China’s Slowing Economy Even Though Our Own Is Heading For... 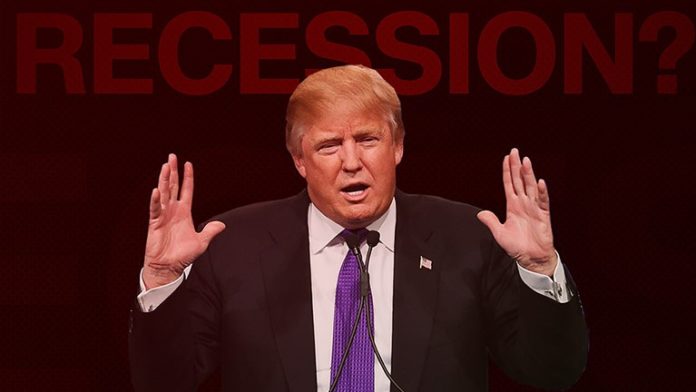 President Donald Trump’s first tweet on Friday after nearly 24 hours of blessed silence bragged about China’s slowing economic growth and declared that a deal is supposedly coming soon as he ignores that his trade wars have also harmed the American economy so much that recession lurks.

Trump announced on Twitter that China is suspending tariff hikes against the United States and boasted about a potential trade deal coming soon due to China’s economic growth slowing down.

China just announced that their economy is growing much slower than anticipated because of our Trade War with them. They have just suspended U.S. Tariff Hikes. U.S. is doing very well. China wants to make a big and very comprehensive deal. It could happen, and rather soon!

This, however, is not a victory for either country, especially our own.

Trump’s tariffs have cost farmers hundreds of billions of dollars, with many being forced into bankruptcy after China retaliated by halting purchases of soybeans and other produce. As a result, crops have rotted and farmers have struggled, especially in red states that voted for Trump.

In addition, Trump’s trade wars, which also included Canada, Mexico, the European Union, and Turkey have hit American businesses incredibly hard as companies such as Ford, General Motors, and Harley Davidson are forced to lay off thousands of workers across the country and move production overseas to cut costs.

Even the stock market that Trump spent much of his first year in office bragging about has lost all of the gains made in 2018 and then some, with several days of record-breaking losses.

It’s a clusterf*ck that Trump is solely to blame for as he prepares the shut the government down if he doesn’t get the border wall funding he demands, an action that will just make things worse.

And even though the end of a trade war would be a good thing, it never should have been started in the first place because our economy was already on the rebound thanks to former President Barack Obama and his sound economic policies.

But now new warning signs that the U.S. economy is headed for a recession have been reported by Reuters.

“The U.S. Treasury yield curve will invert next year, possibly within the next six months, much earlier than forecast just three months ago, with a recession to follow as soon as a year after that,” the report says. The yield curve is a graph that shows how much money a person will get if they buy a Treasury security, which is basically a loan a person gives to the government with the promise of getting more in return. A yield curve inversion means that people will get less money.

Over the last half-century, a recession has followed almost every single time the yield curve inverts.

So, it’s possible the economy could slip into a recession in 2019 or 2020, and Trump’s trade wars are a major reason why. He’s even preparing for the recession by looking for someone or something to blame for it.

So, he can brag all he wants about China’s slowing economy, the fact is that our own economy is slowing down as well and we could be looking at economic calamity similar to what we experienced in 2008, and just like then, Republicans are going to be to blame.