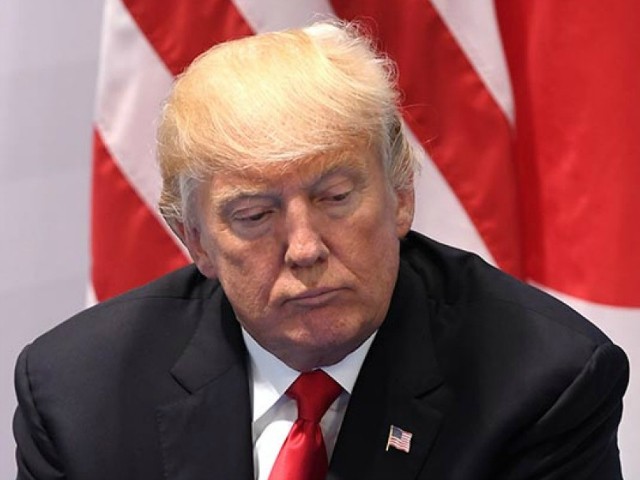 President Donald Trump issued what appeared to be the sanest tweet that he has posted since the government shutdown began nearly two weeks ago, and insisted that he’s ready to work with Democrats as they prepare to take over the House on Thursday.

Just hours before Democrats take over the gavel in the House of Representatives, Trump met with Democratic leaders in the White House, this time without cameras, to discuss bills to fund the government and end the shutdown.

While Trump’s focus is still on border security, he curiously omitted any mention of his wall on Twitter Wednesday evening and managed to write something more conciliatory insisting that he’s ready to work with Democrats to make a deal.

Important meeting today on Border Security with Republican and Democrat Leaders in Congress. Both parties must work together to pass a Funding Bill that protects this Nation and its people – this is the first and most important duty of government…

…I remain ready and willing to work with Democrats to pass a bill that secures our borders, supports the agents and officers on the ground, and keeps America Safe. Let’s get it done!

Did Trump really write this? Who knows. It’s certainly not his style. But it’s pretty clear that Trump is trying to avoid another fiasco in which he says something to weaken his own position. But it’s a little late to do that since Americans continue to blame him for the government shutdown.

On the flip side, presumed House Speaker Nancy Pelosi (D-Calif.) and Senate Minority Leader Chuck Schumer reported after the meeting that Trump and Republicans still refuse to accept the funding bills Democrats are offering, even though it’s the same bill that Senate Republicans unanimously approved last month before Trump changed his mind and rejected it.

“We have given Republicans a chance to take yes for an answer,” she said. “We have taken their proposals unamended by any House bipartisan amendments, but just staying true to what the Senate has already done. Our question to the president and to the Republicans is, why don’t you accept what you have already done to open up government, and that enables us to have 30 days to negotiate for border security?”

During today’s meeting between @realDonaldTrump, myself & other Democratic leaders, we asked the President to open up the government – giving him a path Republicans have supported previously. Why would he not do it? #TrumpShutdown

Schumer also asked Trump to give him a good reason why he won’t accept the bill, and Trump apparently could not deliver.

“To use the shutdown as hostage… Is wrong,” Chuck Schumer and Nancy Pelosi speak outside the White House after a meeting with Trump on border security and the government shutdown. https://t.co/dVe7hzPm1E pic.twitter.com/7cbUwSsk7M

Even Twitter users called Trump out for merely pretending that he really wants to compromise, observing that he waited until the last moment to drop mention of his wall, but also pointing out that he has already rejected compromise bills, even one that gave him nearly everything he wanted on immigration, including $25 billion for his wall. He refused to sign it because it also protected DACA. In short, Trump thinks compromise means being the only one who gets what they want.

So basically you cause problems and then act like you are saving the day and willing to work with others to get it done. ⛽️ 💡

Stop lying. If you were willing to deal you would have backed off the wall. Instead you are holding American ppl hostage for a thing the experts say is not needed. You need help

In 15 hours, the grownups take the car keys away from Trump. Suddenly, he doesn’t mention his racist wall. https://t.co/rU4af3EBKk

Purposefully neglecting to say “Wall”, but that 5th century solution is at the heart of your warped proposal. Art of the Deal my ass … you wreak of desperation!

You walked away from $23+ billion for border security in early 2018 after a bipartisan deal reached your desk that you had said you would sign. The deal provided for a solution for DREAMERS in exchange for almost $25 billion in money for border security. You didn’t sign it.

‘Working together’ requires compromise. It doesn’t mean you always get what you want.

Democrats are offering plenty of border security funding in their bill, which again, is the same bill Republicans passed in the Senate last month. It’s just not going to fund Trump’s useless wall, which is nothing more than a vanity project that will cost taxpayers money that could be used on better solutions to improve border security or something else that will help the American people, such as healthcare. Until he decides to truly compromise by giving up his wall, the government shutdown will continue because of his stubbornness.

It seems like Trump is backing away from his wall, but we’ve sadly been here before only for Trump to turn around and throw a tantrum rejecting the bill because he didn’t get his way.

Sadly, there can be no REAL Border Security without the Wall!