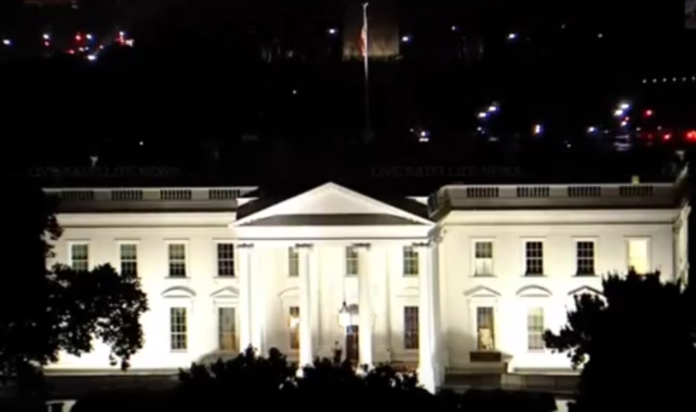 Despite the fact that President Donald Trump’s White House has been operating in utter chaos, especially since Election Day, he took to Twitter on Thursday to insist that everything is just fine.

The massive beating Trump and the Republican Party took during the midterm election this year sent the White House into a death spiral in the days afterward.

First, Trump attacked every Republican who lost during a press conference and then attacked CNN reporter Jim Acosta before banning him from the White House, resulting in a lawsuit that he is likely going to lose.

On top of that, Trump fired Attorney General Jeff Sessions and violated the Constitution by appointing Matthew Whitaker to the post without Senate confirmation, setting up a possible “Saturday Night Massacre” at the Justice Department.

Trump then skipped Veteran’s Day ceremonies in France and here at home, which caused a public relations nightmare.

Now he has decided to remove Homeland Security Secretary Kirstjen Nielsen and is considering firing Chief of Staff John Kelly as well, moves that are not going down well with White House staffers.

And First Lady Melania Trump is even getting in on the drama by demanding national security aide Mira Ricardel be fired over an argument about seating on an airplane.

It’s so bad that a former Trump aide compared the chaos to an “episode of ‘Maury.'”

All of this is happening inside the White House as Trump braces for Democrats to take over the House of Representatives and the investigations and subpoenas that come with it on top of Special Counsel Robert Mueller’s impending report that could include more indictments.

But Trump wants everyone to believe everything is “running very smoothly.”

The White House is running very smoothly and the results for our Nation are obviously very good. We are the envy of the world. But anytime I even think about making changes, the FAKE NEWS MEDIA goes crazy, always seeking to make us look as bad as possible! Very dishonest!

In fact, we are loathed by the world at the moment. Trump’s trade wars and attacks on our allies are an international embarrassment. We’re an international laughingstock right now as North Korea builds up its nuclear arsenal. Even our military might is not as mighty as it used to be as Trump has weakened it so much that a new report shows we could lose a war to China or Russia.

Rather than whine about journalists doing their jobs, Trump should be working to improve the situation in his own White House, but he would rather deny how terrible he is performing and blame others.

This instability is a threat to our nation. Trump is a failure as a leader and he cannot be allowed to continue as president. Our democracy and national survival is at stake and it’s time for Republicans in Congress to wake up to that reality and do something about it before it’s too late.