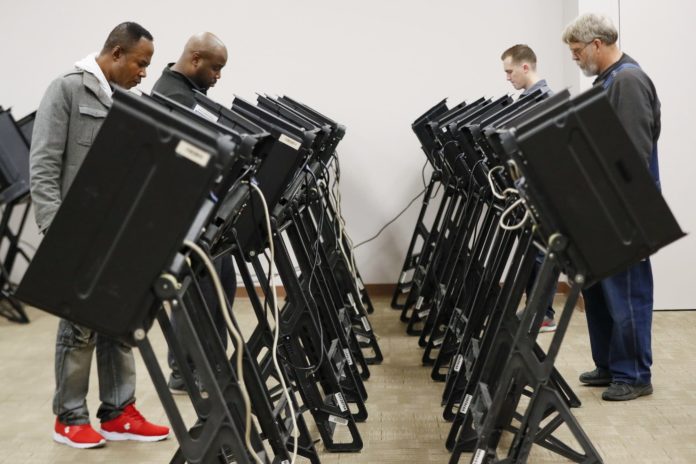 Between 2016 and 2018, at least 17 million voters were purged from voter rolls, the vast majority of them in red states, according to a new analysis of voter data conducted by the Brennan Center.

What states purged the most voters? Texas, Oklahoma, Georgia, Tennessee, South Carolina, Idaho, and Indiana, all of which are led by Republican elected officials.

The study notes that “counties with a history of voter discrimination have continued purging people from the rolls at much higher rates than other counties.”

And it probably won’t surprise you to learn that minority voters are more likely to have their names removed:

“Minority voters are more likely to share names than white voters, potentially exposing them to a greater risk of being purged. Voters often do not realize they have been purged until they try to cast a ballot on Election Day — after it’s already too late.”

As ShareBlue Media notes, Republicans have even been caught red-handed denying people the right to cast a ballot:

Republicans have repeatedly been caught in the act of trying to instigate voter purges as part of a systemic campaign of voter suppression. By tamping down on minority voters and other populations likely to support Democrats, Republicans seek a path to winning elections.

In June, Texas Gov. Greg Abbott (R) was revealed to have authored emails plotting to purge voter rolls in his state based on absolutely false claims of “voter fraud.”

Republicans in Arizona are currently trying to purge 200,000 voters from the state’s rolls. That’s more than twice the number of votes that gave the Grand Canyon State to Donald Trump over Democratic challenger Hillary Clinton in 2016.

And in Georgia, the GOP-controlled government actively worked to purge thousands of voters — the majority of them African-Americans — prior to the state’s 2018 gubernatorial election. Brian Kemp (R) who was then serving as Georgia’s Secretary of State, wound up winning the governor’s race by a razor-thin margin of 1.4 percentage points.

The only way Republicans can win elections is by cheating. And they’re doing exactly that all over this country.